It is the holiday season and most have gone on vacation. I am sitting almost alone in this office now and have the time to write this mail to you all (some special colleagues, friends, and relatives). This mail is a sequel to the one I sent many of you in October.

Before I give you an update of how things are going with us, let me greet you for the new year just in case you don’t stay with me till the end of this mail, which is rather long. On behalf of our family, I wish you a meaningful and good year ahead.

Well, I got a job as a technical writer in a software company in East Auckland. It is a permanent job as well.

Incidently, this was one company that responded to my application even when we were in India. Another job consultant, John T…, had also written to me about the same job. When we got to Auckland, I spoke to the HR person in the company, a sweet lady called Terri. I’ve always been wary of people in HR because the poor things invariably have agendas of their own and axes to grind (and we don’t want to get in their way). But Terri put me at ease immediately. She was welcoming but asked me to get in touch with the city’s public transport company and find out if travelling to this company from Te Atatu Peninsula, where we were staying, was worth the trouble. I found that it was terribly far and meant spending over four hours commuting everyday. [Disclaimer: My impression about people in HR does not extend to the perfectly decent HR people reading this mail.]

Meanwhile I met job consultant John T…, who assured me that we should be able to get a job in Downtown Auckland, which is much closer. He also told me not to get back to Terri for the time being. I was too close up to see the giant axe in front of me. That was the last I heard from him. Several weeks and job consultants later, light dawned, and I sheepishly called Terri again. Understandably, she wasn’t all that welcoming now. I told her as best as I could that I was really serious this time. She told me that they would be wary of taking me in because I might find it too difficult to commute and leave midway after the company had taken the trouble to train me for the job. “Offer me the job and we’ll shift to East Auckland, Terri.” I think that one sentence somehow clicked. A few days later I got a mail from her inviting me for an interview. To cut the long story short, I had several rounds of interviews and tests (one of those tests was HORRIBLE, to do with math, and I was sure I had flunked it).

Tests came in other forms too. Everytime, I left the house for a job-related matter, I wore a business suit. I had no idea if I was dressed right. So that was the dress test. Then at a day-long interview, for lunch, I was given a slice of “Mediterranean Pie” to eat with fork and knife. This was a greater test than the math one. I can manage a steak but this pie was tall with a dry rice filling. Cutting into it was hard enough but it was hilarious trying to lift off the stuff with the fork. My referees must have written sweet things about me to compensate for these shortcomings.

And then, Terri sent me the offer letter. I had given a wrong postal address and so lost the offer letter and then managed to trace it. I did everything wrong as far as this job went. But God had this job reserved for me from the very beginning, and so I got it. Job vacancies do not generally stay open for four months waiting for yours truly to fill it. Moreover, it is very very rare for immigrants from Asia to get jobs that are related to their earlier experience. Here I was, a technical writer, with a technical writing job.

We looked for a house close to a school that was close to the workplace. God sent a friend called Moses to drive us around the area. After a whole day of searching, we went to another friend’s house in that area. They mentioned that about six kilometers away, was one of Auckland’s top schools, Macleans.

That night we found a house advertized in the Net that was in that school zone. The next day, Prisy, Tim and I went to see that house. It had four bedrooms and a double garage. The house was tastefully furnished. It had a gazebo and a garden with an orange tree (with oranges). We loved the house. It was unusual to find such a house within our budget. Not only that, unusually, we were able to get the rental agreement in our hands that night itself. 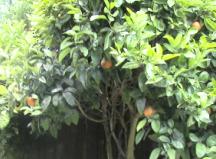 The next day, armed with the agreement and required documents, we submitted applications for all our kids in Macleans College. We were told that we would hear from them in January. For some reason, Prisy’s dean from the old school rang up his counterpart in Macleans and assured them that Prisy would be able to go directly to Year 12 although she has not done Year 11. Two days later, we got a call from Macleans asking for Prisy, Tim, and Lydia to come and enroll. By chance, the school’s bi-annual second-hand sale was held the day we went for enrollment, and we were able to get several sets of neat clean summer and winter uniforms for all of them, including sweaters and jackets. If we paid 800 dollars for second-hand stuff, imagine what we would have had to pay for new ones.

After the truck with our things left the old house, we were left with the task of driving our car through the motorway to the new place. I took the wheel and followed our friend Francis through the entire route, with Philip navigating whenever Francis went out of sight. We had our children in his car so that, should we have any incident, the Dhinakar name would be carried forward. We managed the motorway that day. We safely managed the motorway again, twice, the next day, when we went back to clean up the old house and return it to the house owner. When we were returning after the cleaning, we did have a near incident when I tried to change lanes at a speed of 105 km and saw a van, where I didn’t want it, just as I was doing my final blindspot check. It was something of an effort keeping the car on course as we went into a mighty wobble. One lesson we learnt was that we should not drive at all, leave alone at 105 km, when we had not eaten for 8 hours and felt dizzy and tired. But we came home to a nest of hungry children with cheese burgers, fries (the kiwis call it chips) and chicken nuggets, thanks to MacDonalds. That nest was messy and disorganized but it was home and we were thankful to God for His mercies and protection from the bottom of our hearts. 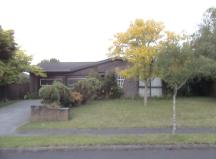 Next to the house is a dormant volcano called Pigeon Mountain. It has a crater that is overgrown with shrubs. 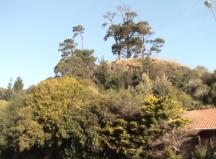 Close by is the Ferry point, and not too far away is a pleasant beach called Bucklands Beach. It takes just 10 minutes to drive to work. The children will have to walk about 20 minutes to school, along a beautiful road.

Once the holiday season is over, Philip will start applying for jobs in this area. Right now he is setting up his study, so that he can carry on with his study of the Bible.

I think it’s wonderful, the way things worked out for us. Something tells me that God hasn’t given us all this just to have a good time. We’ll know when the time comes. I can go on but you must be tired by now.

We are happy here and the only thing we miss is you all. Do write and keep in touch. For those who stayed with me, let me close again with wishes for the New Year.