Mon, 8 Jan 2007
Hi everybody!
Yes, Prisy has reached Japan all by herself…Yes we are talking about the same girl who is not allowed to go downtown without an adult! Yes, I can hear you sing . . . Is this the little girl you carried? Is this the little girl at play? You don`t remember growing older, when did she? When did she get to be a beauty (heh heh)? How did she get to be so tall….wait that doesn`t sound right!!!!…Oh well!

That morning when Mum and Papa left me, at the security check, to the mercy of strangers, was the strangest day of my life so far. Other than taking a bus alone once from the city, I have never been anywhere on my own. I got my luggage checked and I got lost. I ended up at the business lounge where I was given directions where to go. Inspite of the help I got lost again but somehow I wound up wherever I was supposed to go! I followed the Asians and found myself at Gate 3. Finally I found myself in the plane. I sat next to this very nice Japanese man who said absolutely nothing but helped me put my luggage in that shelf thingee, took my lunch and breakfast things after I was done and all kinds of nice things.

I had that little TV thing and I watched Finding Nemo, two episodes of Robin Hood, one episode of Yes Dear, and something called Midsomer Murders. After I reached Osaka, I followed all the passengers to this express which takes you to the other part of the airport. After immigration and customs, I went through those big automatic doors and found Sandy (who had just been mistaken for a terrorist by some policeman). We rode in three trains before we reached their home. They live in the 7th floor of an apartment. It was too dark to see anything at that time. Sandy showed me my room…it was sooo cool. It had sliding doors, the floor had tatami mats. It even had a piano and recliner. The best part was the book shelf! Since it was late we had a quick dinner of bacon and eggs.

Thu, 11 Jan 2007
Maaaaa! Hide my Journals again…Lydia knows where they are!

Today was good. I went for Japanese classes. My teacher today was Ogawa san. She calls me Preesila-san. I met some of Brent’s friends and had lunch with them. Chopsticks are still painful, but I want to get used to them. For breakfast we went to this place called Mr. Donuts….those donuts are simply suuuper.

I met the Americans yesterday. There are three kids Lauren (she’s 19, is she still a kid?), Madeline and Buddy. I met Miku on Tuesday, she’s nice but very quiet.

I’ve learnt a lot about Kojima. A company in Kojima produces 99% of Japan’s jeans (according to Aya). Kojima is also known for producing Tatami edges. Kojima was actually sea turned to land. That’s all for now…don’t forget to hide my journals!!!!

With Miku and Aya

Sunday was a good day. We had prayer meeting at the Naikai where the Americans from Chico are working. There were eleven of us, I think. After prayer, we went to the logos building to bring chairs to the the Naikai building for the party in the evening. 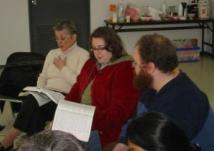 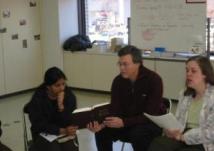 Me, Lyle, and Sandy

Then we split up for lunch. Sandy, Brent, Judy and I went to a Tempura restaurant. We knelt around the table and ate tempura and raw fish! Then we went home and I washed my clothes. We also put my futon out to air. Then Sandy and I went to the Logos building to wash windows. Then we went back to the Naikai building.

Tempura with Brent and Sandy

Many Japanese women and their children came for the party. Most of the little kids stuck to Lyle (who is Lauren, Madeline and Bubby’s dad, Wendy’s husband and Judy’s son-in-law). Heather told me that this is because most Japanese kids hardly see the fathers. The little kids were adorable. We played Bingo and ate the food. Then the kids and their mothers went with Sandy, Wendy and Wendy’s kids to the Logos building while Lyle and Brent took the bible study with the remaining people. It was all in Japanese and I couldn’t understand a word. 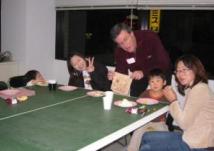 Today I went to a Japanese shrine!!!!! Judy and I climbed 1403 steps up the hill. It was tiring but we reached the top somehow. We took lots of pictures which you’ll eventually get!

And so did Judy

And don’t worry about the earthquake, I didn’t even hear about it until Sam mama called. The Tsunami warning was called off.

By the way, I went to a Yakiniku restaurant with Brent on Thursday. That’s where the table has a grill in the middle where you cook your own food. We ordered beef tongue and other pieces of meat. It was a good meal even though I believed that I’d catch fire and burn to death any minute. I had to remind Brent where my insurance is…..it’s on top of the piano in case anything happens to me!

Mon, 22 Jan 2007
Today the Thompson family (Lyle, Wendy, Lauren, Maddy and Bubby) took Daisuke (a Japanese friend of theirs) and me to the Washuzan Highlands amusement park. It’s a Brazilian park with this Ferris wheel which was soo big that it took 12 minutes for one rotation. I tactfully avoided all rides I was unlikely to recover from. We also watched some crazy people doing bungee Jamps (Yes, the sign said Jamps instead of Jumps). It was fun!

Then we went to a hotel, where I got to sample the food! There was some sort of Japanese Jellie Chocolates and some sort of pink cake which were good. I figure Japanese desserts which don’t have sweet bean paste (ugh!) in them are extremely good! Sandy also bought me some Kiui Dangos…Okayama is famous for those…they’re really good.

Saturday, I’m visiting Sandy’s school where the students are doing the Sound of Music which is hard considering the characters haven’t been assigned yet. Well, that should be interesting =D …

Wed, 24 Jan 2007
Yesterday I went with the Thompson family (Wendy, Lauren, Maddy, Bubby), the two grandmas (Nancy and Judy H) and Daisuke to Kurashiki. First we went to Okayama to see Lyle off (he had to go back to the States), then headed for Kurashiki. We went to this old town quarter where they had these nice shops. Unfortunately I had no idea about the shops and had no money except for some change in my pocket. But it was fun looking at all the stuff in the stores. They had ceramics, food, toys, jewellry and even clothes. The best thing about food stores is that you can sample some of the food. My favourites are the Kiui Dangos and Hakuto cakes…mmmmm.

We also ate at rather traditional Japanese restaurants with their tatami mats, low tables, cushions and yes those abominable things called chopsticks. The Americans and Daisuke have quite mastered the art of eating with a pair of sticks but it’s still a painful feat for me. Man—I never realised eating with your fingers can be a blessing.

By the time I got home I was so so so tired, but I’m glad Wendy invited me. I got a chance to see the cultural side of Japan.

Today Brent took me to Hiroshima to see the Hiroshima Peace Memorial Museum. We took the Bullet train which is called the Shinkansen…I think. As we got closer to the museum Brent was mobbed by these Elementary- schoolers were doing something on peace and wanted his opinion!

Then we went to the museum. It was really touching and if I hadn’t had self respect, I would have broken down and cried. They had the uniforms…correction: PIECES of school uniform belonging to children who had died in the Nuclear tragedy. There was a girl’s sandal which her mother had made (the girl was never found). There was a watch showing 8:15, the exact moment the bomb went off. There was even a lunch box with the charred remains of what was once food which a school boy should have eaten that afternoon.

There was a girl who was born mentally handicapped because her mother had been exposed to the radiation while pregnant. There was another girl called Sadako who ten years after the event got Leukemia as a result of radiation. While she was sick she made little paper cranes which were believed to be lucky hoping she would recover from cancer. But she finally died at the age of 12. She had made…I think 1300 paper cranes. The paper cranes have become a symbol of hope for peace. A statue of Sadako stands near the museum. You can read about Sadako in wikipedia.

I also read about India. Apparently India tested its nuclear devices on May 11 and 13 1998 to ‘flaunt their possessions’. Do I even need to mention that ‘to counter that action’ Pakistan did the same on May 28 and 30 1998? That last part cracked me up eventhough it’s rather a morbid situation. Well, they probably wouldn’t flaunt or counter if they had visited the Hiroshima Peace Memorial Museum. This place is heart breaking and the sad music which they played in the background didn’t help one bit.

Well, I don’t think I’ll go back to Hiroshima in the near future!
Bye
Prisy

Hi Mum
It’s fine here. Yesterday I went with Sandy to Himeji to see the Himeji Castle. It was beautiful. I’m almost done with my shopping. My passport and tickets are fine. I’m excited about coming home. Have fun at camp!
I’ve nothing to report except that I’m a little bit sorry to leave Japan…
Bye

Prisy’s blog: Life and Times of a Rambler