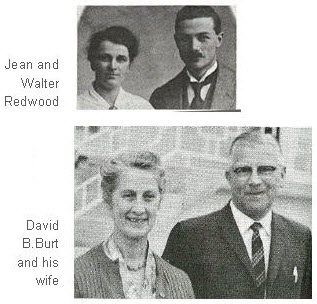 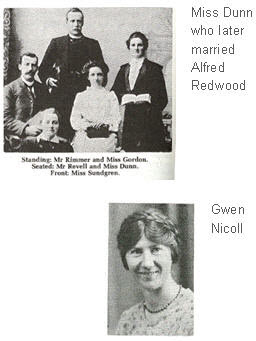 For our founders we would thank Thee,
Their loving gracious plan,
Their many deeds of kindness,
Since first our school began. . .

We thank Thee O Father, for these and all Thy care
Bestowed upon Thy children both here and everywhere.

This is from the school hymn of Clarence High School, Bangalore. I remember Mr. Flack urging our Std 8 class in 1978 to memorize the school hymn and telling us that a good way to do this was to think about the meaning, and then he spoke to us about the founders of the school, the Redwood brothers.

I had not realised the role the Brethren Assemblies in New Zealand had played in the founding of the school until I went through the following book:
In His Name
A record of Assembly Missionary Outreach from New Zealand
By L.A.Marsh

Here are some excerpts from this book that have to do with Clarence and Bethesda Church.

Page 164,165
Miss Maria Dunn went out to India from the Caversham assembly, Dunedin in October 1905. . . She was married to Mr. Alfred Redwood, an English missionary at Bangalore in May, 1914, and shared in his work there in relation to the English-speaking Clarence High School that they started and particularly in the Book Depot as well as house-to-house visiting. During the war years, they worked amongst the troops and expanded the literature work, commencing as a correspondence Bible Study course. By 1992 the asembly had grown to 60 in fellowship. Clarence High School was growing too and it was necessary to extend the buildings. . .
The duel responsibility of both school and printing press was a heavy load. Provision of suitable staff was a continuing problem. The enthusiasm of Dr. S.M. Zwemer for the use of literature to reach Moslems was an encouragement in the printing work. Mr. Redwood had always had an interest in Moslems having studied Arabic in Egypt in 1909 for that purpose.
Mr. W. Wilcox joined the school staff in 1931 as principal and the school went from strenth to strength… By 1935, the school had a good status and the roll stood at 180. The printing and publishing work was continued with Mr. Redwood editing the “Bible Student” magazine.
A period of indifferent health caused them to visit England in 1936 and again in 1939 but Mrs. Redwood found it too cold and returned alone to India in 1940. She continued a profitable programme of visiting the womenfolk both in Bangalore and Travancore using again the language she had learned 30 years before. Mr. Redwood went out again to India to take up responsibilities at the school at Bangalore in 1946, though not particularly well. Mr. Flack arrived from Australia later that year to be principal.
For quite a number of years Mrs. Redwood had suffered from arthritis and when she had a severe fall in 1948 she never really recovered. She died in Bangalore on December 31st, 1950 after 45 years of service in India. For some years Mr. Redwood continued with his interests in Bangalore and retired to England in May 1960. He died on 13th March, 1962.

Page 173,174
Miss Jean Fleming, commended by assemblies in Christchurch, was married on June 15th 1918 to Mr. Walter J. Redwood, an English missionary visiting New Zealand. Mr. and Mrs. Redwood returned to Bangalore, India later that year and were associated with Mr. and Mrs. A Redwood in the English school and book depot. They set themselves the task of combatting the thousands of tons of literature that the world churned out with evil effec by producing more Christian literature. At the same time the school gradually increased both in the number of students attending and in the facilities being offered. The new building completed in Richard’s Town Bangalore in 1923 was constructed in brick and mortar with teak window frames and doors. Clarence School had an appearance in keeping with the high ideals that the founders had set of communicating the Christian message to the alert minds of the youth.
In 1926 the printing press added to the possibilities of producing a greater range of Christian literature but necessarily added to the responsibilities being borne by Mr. and Mrs. Redwood. By 1930 they were producing literature in three major languages using the vernacular script, and tracts alone numbered some 3-400,000 apart from books and booklets. At that time the question of staff for the school was a pressing matter and Miss Wagner of U.S.A. undertook responsibility. In 1931, Mr. W. Wilcox came as principal and brought to the school his quality of leadership that enabled it to grow to High School status. When Mr. Flack from Australia assumed the role of principal in 1954 the school had over 400 students and had an excellent reputation that he maintained while continuing to modernise teaching methods and equipment.
The total output of the press in 1938 was in excess of 1.5 million pieces of literature in five languages. But there were many pressures and the following year it was sold to a mission group and Mr. and Mrs. Redwood, who went to Britain, found it necessary to remain there. Mr. Redwood took a position with the Scripture Gift Mission and it was not till 1948 that they returned to Bangalore. They helped the assembly outreach in the city, there being English, Tamil and Kanarese assemblies funtioning effectively.
They continued in service in India till 1960, maintaining an active interest in the Clarence High School which presented such a wonderful opportunity to influence for good the lives of young people with regular and stystematic teaching of the scriptures.
In May 1960 they retired to New Zealand, taking up residence in Auckland.

Page 183
Miss M.Gwen Nicoll was commended by Onehunga in fellowship with other Auckland assemblies and left for India in May 1931. She joined the Redwoods at Bangalore and assisted in the literary and printing work as well as encouraging the young people in the assemblies there. She found opportunities for service in teaching the Scriptures in the School and in literature distribution with the young people. From 1935 onwards to 1940 her work in the school increased and she enjoyed the opportunities of helping young people in that medium.
In 1940, whe went to Coonoor to teach at the Hebron Girl’s School for several years, later returning to New Zealand.

Page 186
Mr. David B.Burt, B.A., went out to India from Auckland in September 1934 to help in the Clarence High School at Bangalore. He relieved the Principal Mr. W. Wilcox while he was on furlough and was impressed with the size and excellence of the school. In June 1936, in full fellowship with his home assembly at Mt. Eden,Auckland, and the believers in Bangalore, he transferred his activities to the Godavari where he assisted Mr. Naismith in village evangelism and the administration of the extensive school work in the district around Narsapur…

(This book was lent to me by Mr. Dave Aiken, from our church in Auckland. His dad, Mr. A.E. Aiken 1930, is one of the missionaries mentioned in the book.)

2 thoughts on “For our founders”