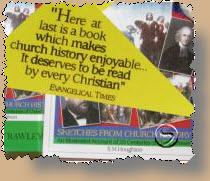 Some of us are going through Sketches from Church History by S M Houghton one small chapter at a time. (By the way, the book has pictures.) Aiding us in this study is the work book by Rebecca Frawley. Both are Banner of Truth books.
Now we are at
Chapters 8 and 9   The Christian Faith comes to the British Isles

These chapters include many interesting little stories and anecdotes that have been handed down over the years that make for interesting reading.

To read more about Sketches from Church History