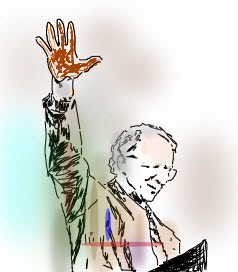 I can’t believe it’s been about 40 years since the afternoon in Calcutta when I walked out of school with my father happily chatting away. Suddenly she passed by and I cheerfully yelled out “Boodi! Boodi!” which means “Old lady!  Old lady!”  I expected my father to join in with my  gleeful laughter, but he stopped and administered a more-than-adequate form of discipline. Normally, he would have explained my errors and given me a warning before actually administering that kind of discipline. But I had exceeded his limit of tolerance.

She was a shy girl in our kindergarten class, who that morning had come to school wearing thick spectacles. The class had jeered at her, and I had enjoyed the sweet fellowship and camaraderie of fellow jeerers as I joined in. The experience after school with my father opened my eyes.

This whole episode of Piper and Warren reminded me about this lesson.  We Calvinists agonise over some preachers outside our camp who are careless with their preaching because we are jealous for the purity of the gospel that is God’s powerful means to save the lost. As a corollary, we strive to recognise men who preach the word faithfully. In doing this we do need to call a spade a spade and try to do so with grace. Conceded, we do try. But we still fall short and nothing like the Piper-Warren episode of recent years to demonstrate it.

John Piper interviewed Rick Warren recently. Tim Challies the well-known Reformed-Baptist blogger had been skeptical about the Piper-Warren interaction a year ago and did a follow-up post after the interview. He felt that he needed to carefully explain his earlier scepticism. In so doing he mirrors the views of some mature Calvinists. But just like Tim worries that the actions of someone like Piper may have serious repercussions, so can the actions of someone like Tim give legitimacy to immature people who may even dare to make flippant and uncharitable remarks about God’s anointed. You only have to google “John Piper” “Rick Warren” and get to the posts of many such, leaving you sick in the stomach. [Just in case it is not obvious, I wish to state that Tim Challies is someone I hold very highly; my blog has listed challies.com under the “Blogs that I view” list for many years.]

To me, until recently,  I had not bothered with knowing who Rick Warren was. My ideas about him had been shaped by book reviews and uncharitable hearsay. It did not help that I personally knew some rather spiritually-shallow people who were so  taken by his book “Purpose Driven Life,” and all this made me assume that Warren was someone who taught a terribly watered-down gospel.  In the Calvinist camp generally, terms like Seeker-sensitive churches and emergent church are used with disdain, and names like Billy Graham and Rick Warren are included in conversations, if at all, with all the necessary disclaimers.  Oh, and there is nothing like an immature-Calvinist huddle to do a “Boodi! Boodi!” jeer like a bunch of hurtful kindergartners.

I think John Piper has brought to our notice that there are men outside our circles who are being used by God. Warren is not of the Calvinist camp and naturally does not hold to all the points of the TULIP in the way we do. And yet compared to other preachers outside the Reformed camp, he is aware of the doctrines of grace and holds to them in good measure.

If you are going to subject him to the scrutiny to which you would subject Reformed preachers, he will fare badly. But if you step back , you might catch a glimpse of a man, warts and all, being used of God and reaching people we do not reach.

Warren continues to preach, which makes the exhortation of Piper towards the end of the interview so meaningful

My prayer, Rick, and exhortation is that with your place in history in American church and in the global church is fixed. It’s just fixed. You don’t need to do anymore.Everybody knows what’s up here and how God has—I believe God has blessed Saddleback and God has blessed The Purpose Driven Life.

With that firmly fixed, my plea is that, according to what you just said, you take the next20 years and really gather these hundreds of thousands of pastors who look your way and press them down deep. Press them into doctrine and press them into the Word, into the deep glories of God. Leave a legacy, not just of breadth and not just of global impact now, but leave a legacy of depth that will last for generations and centuries.

Out there, outside of the Reformed camp, for the greater part, are all kinds of undesirable preachers, some ignorant, some unscrupulous— wolves in sheep’s clothing. And if amidst them all, God has placed some like Rick Warren who actually knows their theology and speak the word, who are you and I to undermine their work before God. We do not have to sit under Rick Warren’s ministry, but we can pray for him and bless him, if we feel led to. Or at least let’s leave him alone. One like Barnabas was led to reach out in love and call him “brother,” and in my opinion, the repercussions of questioning this move are worse than the repercussions of the move itself.

Just like the boundaries separating countries are not lines etched into the land itself, divisions like Calvinist and Evangelical and so on will not follow us into eternity; we have them because they are helpful to us. If we group ourselves after these divisions beyond a point and belittle those outside of our groups—and doing so may afford acceptance in our circles and the peculiar comfort of small talk—we may even be found striving against God.

Warren has been called a theological chameleon by some, which first saddened me, but then in the light of 1 Corinthians 9:19-23, the term seems almost a compliment. How far ought one to “change colour” for the gospel’s sake is something that comes with wisdom and maturity, but it is better to go out into the world and become all things to all men, running the risk of overstepping boundaries, rather than sitting huddled up uncharitably  without reaching out.

In closing, l want to clarify my position on this. I don’t know Rick Warren but I have followed John Piper’s ministry and I have been immensely benefitted. John Piper felt led to reach out in friendship to Rick Warren. This is a local church matter. I think the rest of us should simply trust in God (and in Piper a little), and if we are interested, watch and see how things unfold.