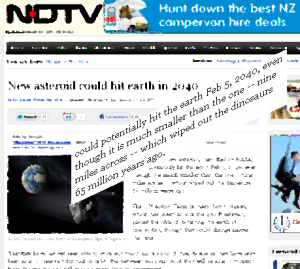 I am no historian, and yet when I contributed my research about an ancestor, Pradani Muthirulappa Pillai, in Wikipedia, it was accepted as factual after some simple checks. Today if you Google this name, you will get about 3000 hits, most of which quote my Wikipedia entry. Recently, during the Periyar-dam troubles in South India, some of the documentaries mentioned his name, a connection they probably got from one of these 3000 “sources”. Please do not get me wrong; I am confident that what I wrote is true, but the point I am trying to make is that it was far too easy to “establish fact.”

I mention this because I read a news item today that mentions the extinction of dinosaurs by an asteroid 65 million years ago as if this were a proven fact. It took less than five minutes to find out that this is clearly not a proven fact, and what I found was a strange mixture of assumption and good scientific data alternatively layered one above the other. As a Christian, while I keep an open mind about how the first book of the Bible is to be understood, scientific propositions related to the timeline of the cosmos matter to me.

Everyone writes what is right in their own eyes, and the world does not have the means to monitor this unstoppable prolification of information. Moreover, for the greater part, what sets a piece of information apart and draws attention to it is not necessarily its excellence and thoroughness, for this is an age when mediocrity, incompleteness, and even the spurious can masquerade as established truth if one knows how to go about it.

Going back to the topic about the extinction of dinosaurs, it all seems to boil down to the presence on the earth of a form of iridium that is found in asteroids. Like in the game of Chinese whispers, each retelling removes the latest audience further and further away from the real facts. Even in my short research, I could see an article dated 5 March 2010 in the TG Daily that states: Evidence ‘conclusive’ that asteroid wiped out dinosaurs in days

Obviously, the quotation marks were easy enough to omit in subsequent retellings.

I’ll close this post with a link to an article, Dinosaur Killer, written by a scientist who is a Christian, offering an alternate explanation for the iridium-asteroid-dinosaur connection.