Sunday devotion
Normally, Sundays are set apart for the Lord—for church and so on. But today was different.

I am glad that the whole group was able to get together after breakfast for a devotion. We first listened to half of the following sermon by John MacArthur
<Why We Believe While Others Reject >
The sermon’s text was 1 Corinthians 1:18-31. We then discussed what we had heard. We finished our short devotion with a prayer.
__________________________
Another trip to the Falls
This time, we parked in a different place. On our way to the Observation Deck, we came across this sign. Everyone turned around pretending to go to Canada. 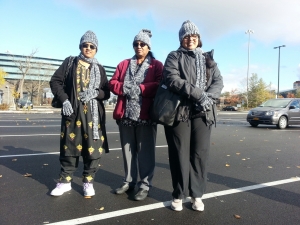 Some pictures taken on the Observation deck 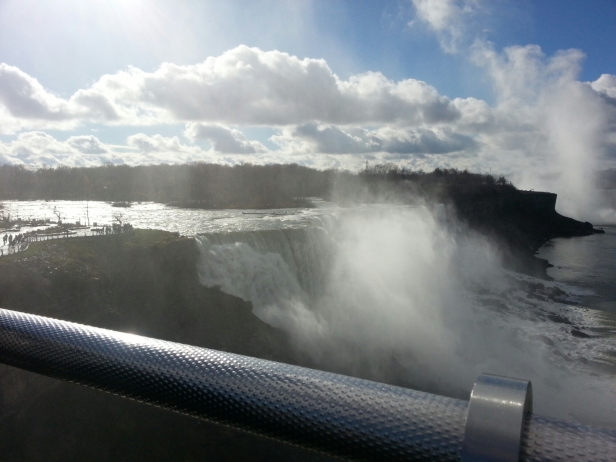 You can see the Canadian Horseshoe Falls between Philip and Vinod.

You can see from where last night’s colourful Falls pictures were taken. 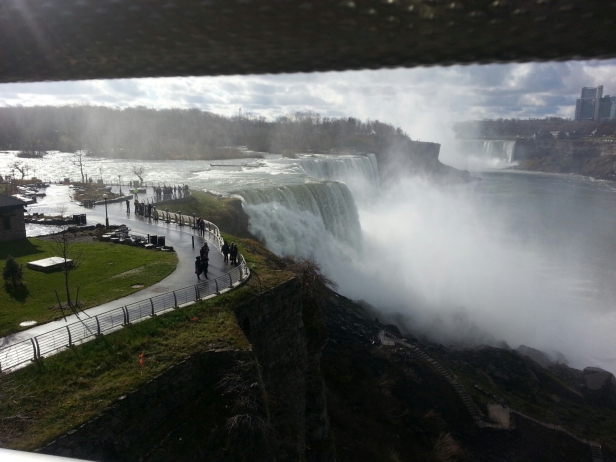 On our way to the Visitor’s Center, peering through the railings of one of the bridges we saw a pretty rainbow. 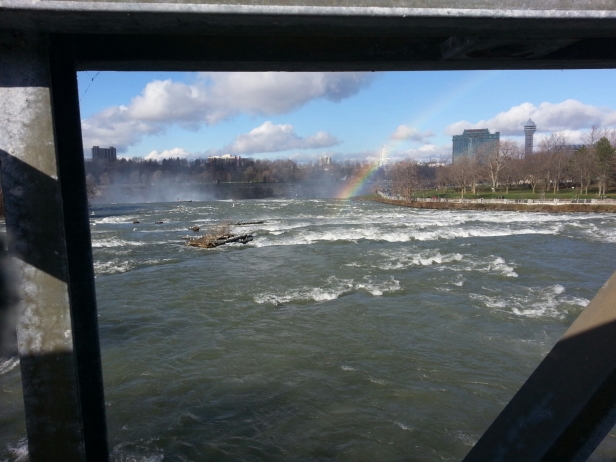 I took this picture of Surendar annan outside the Visitor’s Center. He looks dangerous but is in fact anything but.

Also just outside the Visitor’s Center, a monument of someone important from Yugoslavia.

While we waited for the group tour of the gorge, we looked at some pictures on the wall.

A time when water did not flow:
In 1969, the Niagara river was diverted from the American side of the Falls. During this time, the U.S. Army Corp of Engineers strengthened a number of faults to slow down the erosion of the American Falls.

A time when the water froze:
I am not sure when this picture was taken, but even in February this year, the Niagara Falls experienced this phenomenon. Experts say that the Niagara Falls has far too much water to actually freeze completely.

The group was taken by elevator over 70 feet down and along a corridor,

and outside for a bit,

Although the temperature was less than zero degrees, our walk to the car was pleasant enough.

And included signs, monuments, and even flags, but we did not stop for a closer look.

Vino discovered that when using the phone one need not be gloveless in one hand. 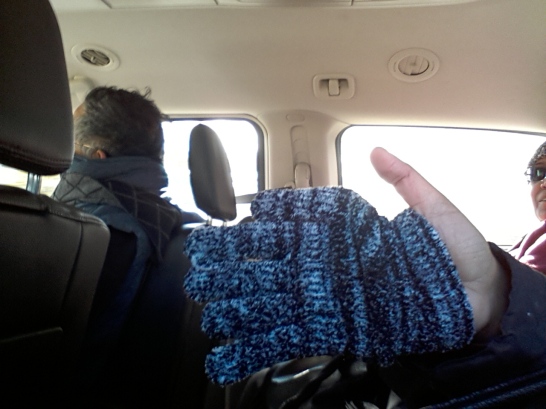 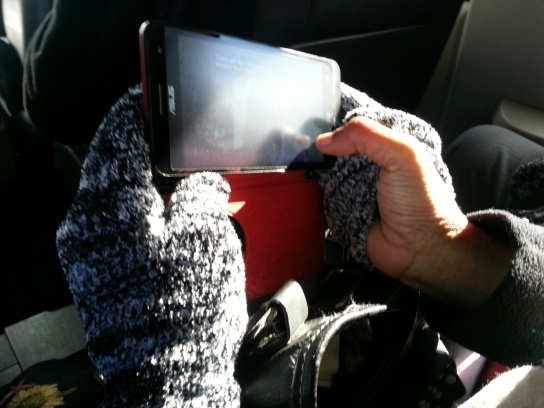 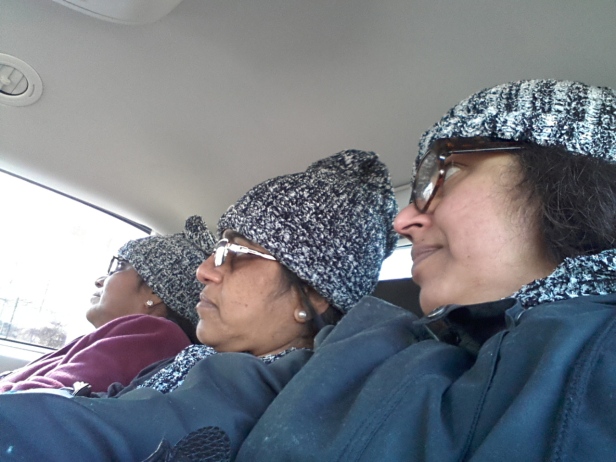 __________________________
Surprise from Canada
Ever since we reached the East Coast from Seattle, we knew that a surprise had been planned by Kavitha. Our family is not great at keeping things secret, and so we were given more and more clues, mostly inadvertently.

So, we knew that someone was coming to meet us from Canada.

Not long after we returned to the house, David (or Mano Annan as he is known to us), the cousin of Sekhar annan, Surendar annan, and Philip, arrived with his lovely wife Rosalind.

It was a wonderful time for everyone to reminisce about old times and get facts of family history right. Theirs is a remarkable story of a 31-year strong marriage, arranged by a friend between a young Anglo-Indian girl and an almost-Anglo-Indian Tamil boy, from the Railway Colony in Madurai, India.

We had lunch together.  Good Indian food from a restaurant nearby plus parota that we had brought with us from Potamac.

But it came time for them to leave. We are friends on Facebook. 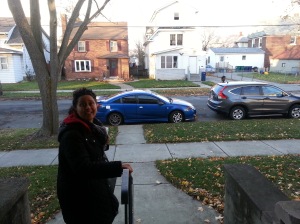 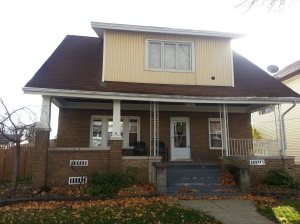 Those connected with the 1981 batch from my school, Clarence High School in Bangalore, are on WhatsApp in a group. This includes those who started out as toddlers in this batch and later left for various reasons. It also includes those like me who joined this batch much later.

When I realised this afternoon that coming over from Canada was doable, I asked this WhatsApp group if any of the “Canadian Batch-81 Clarencians” would like to come over. Astonishingly, one friend Carrie and her husband decided to do just that! We hadn’t met since 1986. 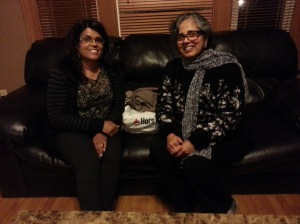 Carrie had started out with the 1981 batch but had left in 1976. I had joined the batch over a year later in 1978. So we did not know each other as classmates in school. But we had been in Sunday School together for a while and had attended VBS together. I remember going to her house to play with her and her sister. I remember their mother’s tasty beef preparation. I remember being astonished by their fruit-laden Jackfruit tree.

Later in College, in Mount Carmels, we were in different disciplines, she in Commerce and I in Science. But we did get to meet every now and then. 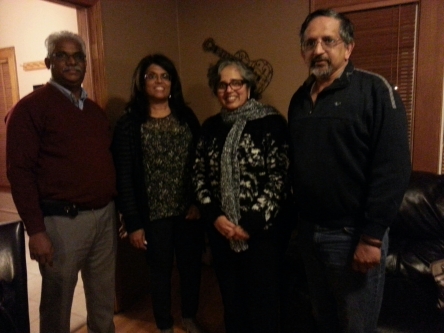 It was an unexpectedly warm gesture for them to come to see us. When they came, they invited us all to dinner, and Philip and I accepted. They took us to an Italian place in Buffalo called Olive Garden. We had a wonderful time of Christian fellowship.

Turns out Carrie’s husband and I have many friends and even experiences in common. Although we do not remember each other per se, we were part of Sala thatha’s Violin classes for Lutheran kids the year it was held in Pavanasar Lutheran church in Bangalore. We’ve been to the same BCM Tamil Bible camp run by Jesudoss Annan and Violet Akka.

We had much to talk about, including the way God had guided us in our lives.