For 42 years Philip has been hearing about Kuwait, ever since his elder brother Sekhar Annan married a girl (Philip’s anni) whose parents lived there. It was now time to visit the country and see for himself. Why not also go to Muscat and see cousin Sam and his family too. So we booked our tickets, and we were going via Dubai. To add garnish to the sumptuous plan, we would also meet up with some friends from the past.

We checked in our two large suitcases and travelled practically hands-free, which was nice. We had a brief period of transit in Melbourne.

We slept through most of the 14 hours on the flight to Dubai. Terminal 3 of that massive airport in the early-morning hours of 13 October 2019 was quiet. We had to get on a train to get our visa-on-arrival and pick up our baggage.  From there, we knew that we had to reach Terminal 1 to drop off our luggage and then leave the airport.

It was difficult to communicate, with the limited Wifi, with our friends Ravi and Marcia David, who had come to Terminal 3 to pick us up. Instead of meeting them there, we got on to the airport shuttle to get to Terminal 1, where we finally found the luggage-hold place. We were luggage free for the next 12 hours. Cool!

After that initial confusion, we eventually met up with our persevering friends, who then took us to their home in Sharjah.

After freshening up, we met up with more friends, Martin and Jessie Richards, and had a fabulous South-Indian breakfast together in the Davids’ home.

Then the Davids took us out on a long drive around Sharjah first and then Dubai, stopping every now and then to take pictures. Below are some pictures from that drive. But even more important were the conversations and renewing of an old but precious friendship.

We then went to see more interesting buildings, including those in Hotel Raffles. 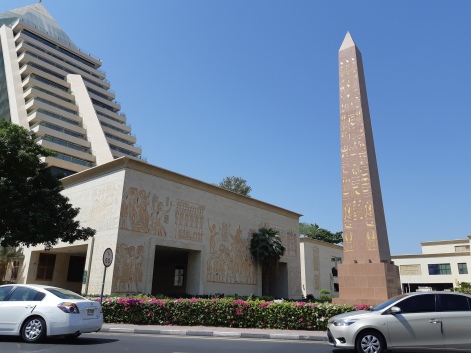 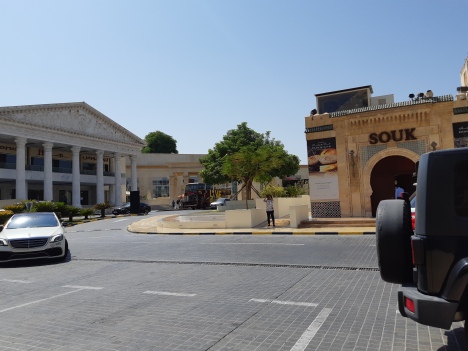 The Burj Al Arab Jumeirah was beautiful, and for me somehow that is the building that I associate most with Dubai. The Jumeirah Beach Hotel close by was also amazing.

Finally, Ravi drove us around Dubai’s Palm Jumeirah Island, which is in the shape of a huge palm tree with a crescent on top, and which can even be seen from space.

The Davids left us at the Dubai Mall, where Arun and his son Adi met us at the Ice Rink.

Arun took us to the Shawarma place in the food court for some lunch.

We then enjoyed the aquariam and looked at the shops. 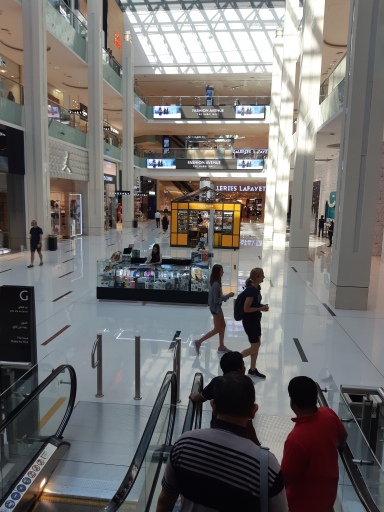 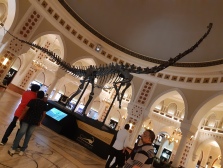 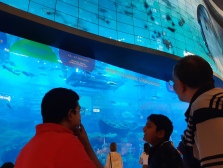 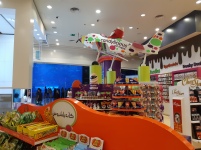 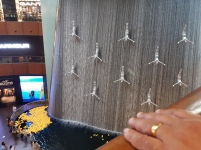 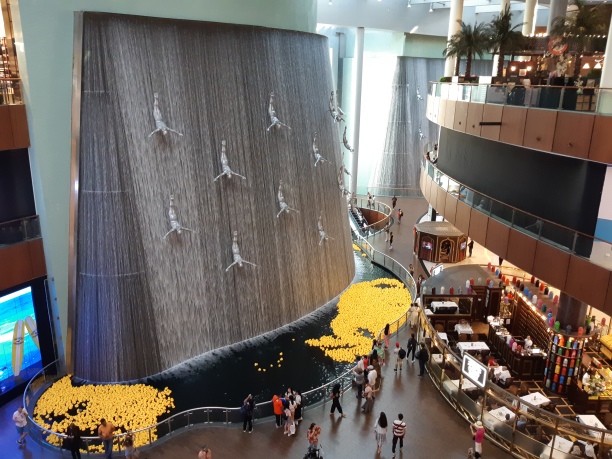 Then we went outside the mall and had a good look at the Burj Khalifa, which is said to be the tallest building in the world. We did not have the pleasure of seeing the musical fountains as it was too early for that. We also took a stroll in the Souk Al Bahar, a market in the vicinity.

After this, we got into Arun’s car and went to a petrol station near Preeti’s work place, where she hopped on. 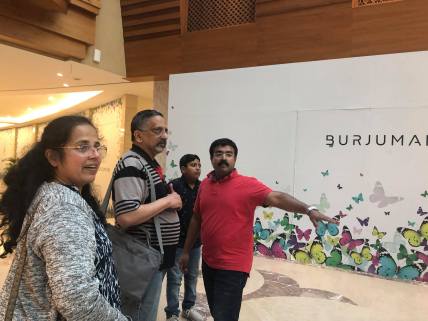 We then went to Dubai Frame and took some pictures from the outside. Because the sun was setting behind the Frame, we had to take photos at an angle, from the side.

From there we went to Burjuman Mall, where we found a table in the food court to talk over some samosas. Arun and I needed to discuss our differences on matters like conversion to Christianity and the gospel. Hopefully our talk brought more clarity than confusion. But we all agreed that this discussion needed to be ongoing. One thing that was very firmly established was the love and regard we had for each other. I had warned young Adi that his daddy and I were going to have a “fight” and to be ready for fireworks. In the end, an almost disappointed Adi said that the whole thing was almost like a water-filled balloon that had a tiny hole in it; instead of an explosion, all we had was a balloon becoming smaller and smaller.

Speaking of balloons, this balloon-decorated ceiling was impressive.

Then Arun and Preeti dropped us off at Terminal 1 of the airport.

We were three or four minutes over the time of 12 hours. So instead of paying 80 Dirhams, we paid 160 Dirhams! This is something for unsuspecting travellers to watch out for. But in the greater scheme of things, what is an extra 80 Dirhams?

One thought on “Visiting the Middle East – Starts with DUBAI”