A whole year after my friend Sarah gave me Summer the Welsummer to keep, we now have a new chook join us.

For a few days, Joe who lives in Clendon had been observing a chicken wandering around. Was she a stray or did she belong to someone else?

She then started visiting their property, and the children fed her something. Of course, she became a regular visitor after that. But nothing prepared them for what transpired on Sunday morning.

Sundays mornings for us are busy, as you know, what with getting ready for church and preparing for our various church duties. In the middle of this, Joe heard a knock on the door. Who can it be on a Sunday morning?

In she came and surveyed the lounge. The children were excited and the younger one was worried, “Don’t let it eat my toys!”

Joe called me for advice, which was “Plonk her in a cloth bag and bring her to me;” I live just ten minutes away.

Joe and his daughter brought her to me, and I put her in my spare coop with some food and water. Just before they left, Joe’s daughter named her Flossie. 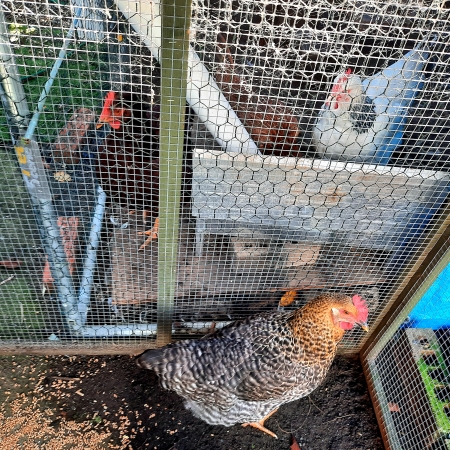 After church, I put a post in the Facebook group ‘Manurewa Spread the News’ asking if anyone in the Clendon area was missing a chook. So far no one seems to have.

A day later, last night, my son and I moved the coop close to the big coop where I have my other birds, who can get to know Flossie a little.

Tomorrow after they have gone to roost, I will put Flossie in along with the others, and hopefully all will be well.

May she be a great layer. I will give Joe a few of the eggs.