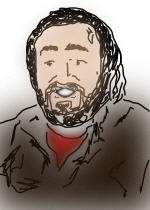 Luciano Pavarotti died on September 6th this year. The youngest of his children, Alice, is just four.

CNN reported today that in a recent appearance on TV, his wife mentioned Alice’s earlier claim that she sang better than her dad. But one day the toddler heard him sing and made a concession, saying, ‘We sing the same.’

One thought on “Progress in her knowledge of her dad”