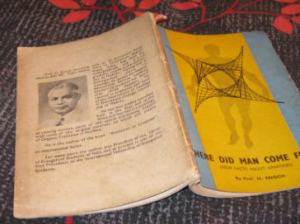 In the mid 80s and in Mount Carmel College in Bangalore, doing my B.Sc., I was goaded by one young lecturer to participate in a lecture contest. An initial round or prelims was held internally and those selected were sent to compete at the intercollegiate level. I was one of the participants who got to the finals where I gave an half-hour lecture on a hazy subject in genetics called Spindle Dynamics.

Every biology student knows that during cell division, at a stage known as Metaphase, the chromosomes line up at the equator of the cell. Then at the next stage known as Anaphase, they begin to separate out to either pole. My lecture was about how this separation was made possible. It dawned on me then that so little was actually known about so many processes in God’s nature. I also realized that science included theorizing and speculation, and that it was possible to sound very pompous and scholarly without knowing much.

The subject of Spindle Dynamics was not my choice but my lecturer’s. At the prelims, which was just for five minutes, my topic had been “Refuting the Theory of Evolution.” The moment I mentioned to her that I had selected this topic, she warned me that some judges did not take kindly to that subject.

When I got through that round, she prevailed upon me to change my topic for the finals.

Ah, but how I enjoyed the prelims. Being an unusual topic and one that was taboo, I had the immediate and full attention and involvement of my audience. It was my five minutes of fame. I got my material from a little booklet “Where Did Man Come From?” that I found in my father’s study. Full marks to Prof. H. Enoch, the author of that booklet.

The back cover has some information about him, that I shall reproduce here:

Prof. H. Enoch (residing now at 19, Ritherdon Road, Madras-600 007, Tamil Nadu), born in Trivandrum (Kerala State), India, had both his undergraduate and post graduate course in the University of Madras. Having had a distinguished course in Zoology, he joined the Madras Educational Service teaching University students for more than three decades. He retired as professor and head of the department of Zoology in Presidency College, University of Madras.

He has also widely travelled both in the East and in the West and has had the privilege of visiting various parts of the world acquainting himself with some of the original materials on which the theory of Organic Evolution is founded.

He is the author of the book “Evolution or Creation”, and international seller.

During that five-minute speech, I shamelessly quoted bits from this booklet. One bit that I can still hear myself articulating is from the following passage.

“Now it is true that some similarity exists between the blood of mammals which may even admit of their being arranged in a graded system. But this chemical similarity cannot prove evolution. Further research along the same lines has shown that the tiger and the whale are closer of kin. But such inconvenient facts are ignored by evolutionists. Blood analysis has revealed other interesting facts. The specific gravity of human blood is 1059; or the pig and hare 1060; of frog 1055-56; of the snake 1055; and the monkey’s is 1054.9. From this table we can see that the frog and snake are closer to man than the monkey, while our nearest relation is the pig! In the University of Madras, a professor gave a university lecture dealing with our “piggian” ancestry. Of course, he had other facts of similarity to support his thesis that we have a closer tie with the pig than with the monkey or the ape!

But this is not all. If the blood test is a criterion of common ancestry why not the milk tests too? Chemical analysis of the milk test shows that the animal which stands nearest to man is neither the monkey nor the pig but the ass! To what ridiculous conclusions the evolutionists lead us!”

Prof. Enoch was a man who loved the Lord Jesus with all his heart. In his conclusion in the book, Prof. Enoch says:

. . . The Bible speaks of creation and a catastrophic flood which accommodates all the known facts of science. It says, “In the beginning was the Word (Christ), and the Word was with God, and the Word was God . . . All things were made by Him; and without Him was not anything made that was made” (John 1:1 & 3). In Hebrews 11:3, it is stated, “Through faith we understand that the worlds were framed by the Word of God, so that things which are seen were not made of things which do appear.” The same Bible says in John 1:14, “ And the Word (Christ) was made flesh, and dwelt among us, (and we beheld His glory, the glory as of the only begotten of the Father,) full of grace and truth.” This is a great mystery. Yet it is a prophetic fact of history and human experience. The author has a definite experience with the Spirit of Christ forty two years ago which is still fresh in his heart and mind. His spiritual eyes were opened to see the holiness, purity and redeeming love of Christ on the cross. His (the author’s) burden of sin was removed, and love, joy and peace took its place. A conviction that the Bible is true took hold of him and there is no longer any doubt that it was creation and not evolution. It is this conviction that the writer wishes to share with his countrymen that they may know their Creator and the fact of creation. Jesus Christ said, “You shall know the truth and the truth shall make you free.” —free from all the man-made philosophies of the world, be it social Darwinism, militarism, atheism, fascism or communism. However good these philosophies based on evolution may appear to be, they do not satisfy the deepest longings of the spirit of man and hence are bound to fail in the long run. Jesus Christ said, “I am the way, the truth, and the life: no man cometh unto the Father, but by Me. The humble prayer of the writer is that all his readers may come to know their Creator and understand His creation. . . “

I was pleased to see an article about Prof Enoch in the AnswersinGenesis.org site. The article entitled ‘The man who got me hunting down evolution!” is by David C.C. Watson whose books ‘The Great Brain Robbery’ and ‘Myths & Miracles’ have been in our library for over twenty years.