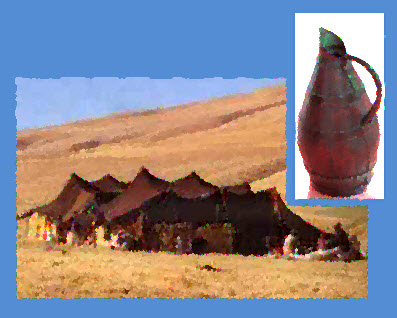 All the Bible stories that I learned before the age of 20 are etched more deeply in my mind. Here is one of the new ones that I am trying to become more familiar with. You’ll find it in Jeremiah chapter 35.

Jehoiakim, the son of Josiah was king of Judah. God told Jeremiah to bring the Rechabites into one of the chambers in the temple and offer them wine to drink.

So Jeremiah spoke to one of them, a man called Jaazaniah, to tell the other Rechabites—his bothers, sons, and others—to come to the temple.

When they came, Jeremiah set pitchers of wine and cups and told them to drink. They did not touch the wine. They were teetotallers.

They told Jeremiah that they would not touch the wine; they did not drink wine because their ancestor Jonadab, the son of Rechab, had bound the family under an oath before God that they would never drink wine. In fact, Jonadab’s oath involved more than just wine-drinking. The Rechabites were not to build houses or farm or have vineyards; they had to live in tents and live a nomadic life. This family had been faithful to the oath and had lived like nomads. In fact, even at that point in time, they were in the city of Jerusalem only because Nebuchadnezzar had come against the land.

God told Jeremiah to use the Rechabites for a Show and Tell lesson to the Israelites. What a contrast! Here, on the one hand, was a family that had been faithful to the commands of thier ancestor Jonadab, and there, on the other hand, was a nation that was disobedient to many (and persistant) messages from the God of heaven to stay away from idolatory. “I have called to them and they have not answered,” God said.

God would punish the nation with terrible disaster. But the Rechabites, He would bless with godly descendants.

One thought on “God’s Show and Tell: Obedience of the Rechabites”