Using free WiFi in Auckland airport,  I start this series. We are going to America!

My mental picture of America is about to be updated and changed, so I’ll use this post to transition from the America in my mind’s eye to the one I will experience shortly.

My dad returned in 1964 after a three-year stint in the US. I was born the next year, so I grew up listening to my father’s stories and looking at his photographs.

Photos—we had a lot of them, because photography was his hobby and he developed the film himself.

For instance, this is how a laundromat in the US looked like in the early 60s:

And here is a picture of the tube train in New York:

As a librarian in Brooklyn Public Library, he did a stint in Library on Wheels. In these photographs, you can see some of the children who would be between the ages of 55 and 65 today. A young male photographing children would be deemed most inappropriate today, but that was another era. 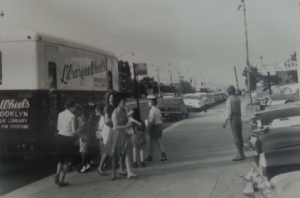 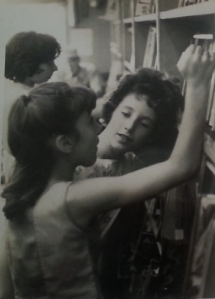 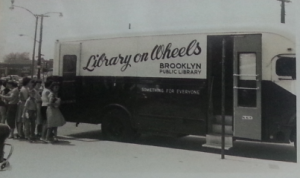 Students in the university were invited by families over Christmas. The following photo was taken on one such occasion when GB spent Christmas Eve with a family.

He also had many photographs of friends like this one; GB is seated second from the right.

And then you have this picture of the Mrs. Nelson, his boss. 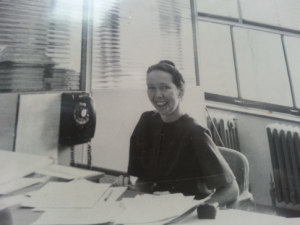 Mrs Bertha Nelson’s affection and kindness had an impact on my life. When I was about three, she sent three books for me. These I read a million times. My children grew up with them and I have them with me in Auckland. Can you guess what the titles of these books are?

When my father heard that I was going to the USA, he asked me if it would be possible to trace some of his friends and old acquaintances.

52 years have gone by. I looked these names up on the Internet. While I could not find out much about what became of Mrs. Nelson, I think I have traced the other name that GB mentions, Felix Blomquist, fondly remembered as the godly friend who introduced him to the song ‘His eye is in the sparrow.’

The America that my dad experienced is passing away, giving way to the new.

I am grateful for this opportunity that God has given Philip and me to visit the States.

Here is a picture taken at the Auckland airport, just before our Qantas flight to LA. In fact, we will have a short time of transit  with a change of plane at Sydney. From LA, we will fly by Delta Airlines to Seattle.

One thought on “America half a century later”