We were having another family, friends of Vinod and Kavitha, join us for the Thanksgiving meal (lunch). Kavitha had made many dishes, many of them traditionally served with the main dish—roast turkey; I was impressed. 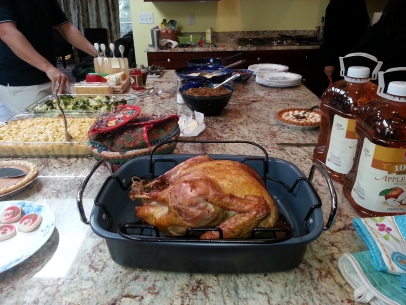 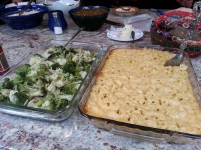 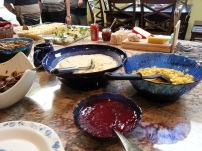 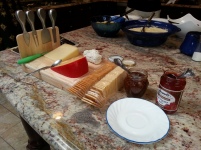 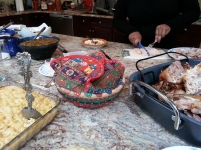 Vinod’s friend was happy to carve the turkey.

The three brothers were dressed similarly and did the three-monkeys pose for the camera. See no evil; speak no evil; hear no evil.

Much choice for drinks. 🙂

I have never had Root Beer before but have known about it all my life, thanks to Dennis the Menace. Kavitha said that it tasted like liquorice. She was right, but the more accurate description, in my opinion, would be Iodex, the pain ointment in India. When I read the contents, it actually contains the same stuff as Iodex, Methyl Salycilate.

The afternoon was spent relaxing and chatting.

and even observing deer in the garden.

At night before the children went to bed, we sang “Give thanks with a grateful heart” had a time of prayer, and this was when we discussed something about the festival itself and its origin.

Family Thanksgiving Devotion
Some history about Thanksgiving
On 6 September 1620, 102 pilgrims left Plymouth in England. After a difficult two months at sea, they arrived in Massachusetts in late November. They had a harsh winter during which nearly half of them died. With help from the local Indians, they reaped a good harvest.

On 13 December 1621, the grateful pilgrims declared a three-day feast to celebrate with their Indian friends. But till the mid 1800s, thanksgiving observances were held at the State level.

In the 1830s, a lady called Mrs. Sarah Joseph Hale made it her mission to make the national day of thanksgiving a reality. Over a period of thirty years, she contacted president after president about this matter. Finally in 1863, President Abraham Lincoln set aside the last Thursday of November as a national day of thanksgiving. However, it was only in 1941 that Congress permanently established the fourth Thursday of November as a national holiday.

The five kernels
My great nephew Simon read Psalm 100:4-5— Enter His gates with thanksgiving and His courts with praise; give thanks to Him and praise His name. For the Lord is good and His love endures forever; His faithfulness continues through all generations.

Then his sister Anna read Psalm 92:1— It is good to give thanks to the Lord and to sing praises to your name, O most high.

One exceptionally harsh winter, the pilgrims had very little food and rationed out a daily portion of five kernels of corn per person. In spite of dire circumstances, the pilgrims were thankful for God’s blessings.

Each family represented in our group had to mention five blessings of God in their lives, one for each kernel, that we were grateful for. The first kernel for us all was the sacrifice of Jesus on the cross. Without that, according to the Bible, we would remain in our sins and perish. But when we believe in Jesus’ work on the cross, our sins are forgiven and we can live forever.

The day after Thanksgiving is called Black Friday.

Black Friday is the day following Thanksgiving Day in the United States. Since at least the 1930s, it has been regarded as the beginning of the Christmas shopping season in the US, and most major retailers open very early (and more recently during overnight hours) and offer promotional sales. Wikipedia 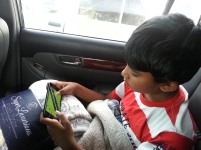