Going to Grace Community Church to listen to John MacArthur preach was a great deal to us, up there along with going to Disneyland and Universal Studios. Hero worship is disgusting and John MacArthur, the Pastor of this church is just a man. However, we respect the work that he has done in the Church of Jesus in our day, both in reaching people for Christ and also in edifying believers around the globe.

Philip was the first person in our circles to hear about him; this was in 1981. He had some old books, one I remember was about the work of the Holy Spirit, that John MacArthur had written back in the day. So we deem it a privilege to have been able to come and hear him, someone who has played a big role in moulding the way we think about the things of God.

We decided to attend the second service, at 10:30 a.m. As we have done these last couple of days, we used Uber and got dropped off inside the church campus.

The Master’s College Collegiate Choir and Orchestra presented several Christmas numbers. It was beautiful. The Pastor, John MacArthur led the service. At one point he asked the ushers to give Welcome booklets to visitors. [Visitors were invited to the Welcome Center, where they could have some refreshments and also receive one of John MacArthur’s books. We did go later on and we did get a book, which was nice.]

After the music was done and it was sermon time, the choir and orchestra left the stage. John MacArthur began his sermons on John 17 today, and after the elaborate introduction, he covered Verse 1.

Introduction
We know that Jesus prayed constantly during His time on the earth; the gospels tell us He did. But we know precious little about what the content of those prayers were. Here in John 17, we have 26 verses of Jesus’ prayer. This prayer is plain and yet majestic, just as it is at once simple and profound.

The petitions Jesus made of the Father in Vs 1-5 have been answered. The rest of the prayer is ongoing. Indeed, Jesus is our high priest and intercessor,and continues to intercede for us.

Verse 1
John MacArthur than continued to explain Verse 1, speaking about each of the phrases in bold font below:
When Jesus had spoken these words, a he lifted up his eyes to heaven, and said, “Father, b the hour has come; c glorify your Son that the Son may glorify you    (John 17:1 ESV)

Immediately after the service, we were greeted by a lovely couple—the Rosenbaums—seated behind us. 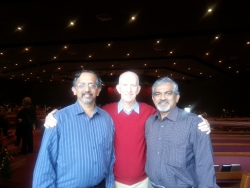 They showed us the Welcome Center before leaving. After a cup of coffee in the Welcome Center, we went to the Book shop, where I met a sweet Indonesian girl called Sylvie. We bought some books to keep as a remembrance of this day, as well as some to give away as gifts for others. 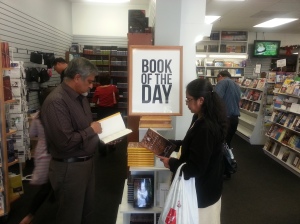 We took a few final pictures outside 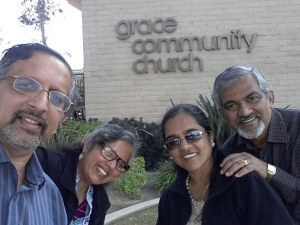 We spent the rest of the afternoon in Citadel Outlet. We could not help thinking that the Outlet Mall in Katy TX is nicer, and everything had been more reasonably priced.