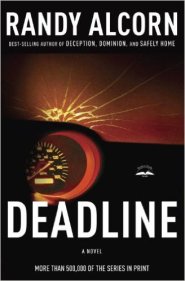 After what must be years, I have finished reading a storybook, Deadline by Randy Alcorn. I’ve enjoyed the book. Unputdownable and of 426 pages.
Two of the characters die, one goes to heaven and the other to hell; the storyline goes in and out of the earthly realm seamlessly. To do this, the author develops his idea of heaven. I would not touch a book like this, if I were not confident about the author’s theology and world view. And even then, I’d normally have been worried about such an attempt, but I think the subject was safe in this author’s hands.

One day, we hope to find out how well his imagination compares with the real thing. About this, in his note at the end of the book, Randy Alcorn writes: “I have therefore taken biblically revealed truths and developed (hopefully not distorted) them in a speculative (hopefully not reckless) fashion. I have carefully studied the biblical accounts of the afterlife and sought only to include concepts and portrayals which conform to or at least do not violate any biblical teaching. While much herein is extra biblical, I have sought never to be unbiblical . . .”

Most of the time, I was comfortable with the author’s imagination; I felt that he had perhaps over developed the guardian-angel theme, and under played the guidance of the indwelling Holy Spirit in the daily life of a believer.
However, I found the afterlife descriptions refreshing and exciting, filling me with greater resolve to make what remains of my time on earth count for Jesus.

I think the author has been a trifle too ambitious in wanting to incorporate the many contemporary issues and topics that have been included in the story. Thankfully his skill nearly matches his ambition, and the interest of the reader is sustained through the book, at least mine was.

I wish I had kept tabs of the many times during the reading of the book that I was tempted to post a quote from the book on Facebook. Below are some of the bits that pop out when I thumb through the pages.

Finney marveled not only at what Zyor was telling him, but that the angel had never ceased to wonder at an event millions on earth affirmed in their doctrinal statements with such little wonder at all . . .

And just when we thought Elyon could not surpass this greatest miracle with another, there came the greater one.” Zyor stood, and his voice trembled, not only with awe, but now with unmistakable anger.
“That little hill, where little men were permitted to do unspeakable things to Elyon’s Son . . .

“. . . When you were first closed out of the Garden of God, I thought He was done with you. You have seen so many things here that cause you to wonder, and you have barely begun to see. But for me, the greatest wonder is that you are here at all.

“We writhed in agony, ” Zyor continued. “We had never thought such pain possible here in the perfect realm. And yet we grew to know—though not completely understand —that all this was necessary to meet the demands of Elyon’s justice and His love. He did not need us to rescue Him. With a single word, with merely a thought he could have unmade all men . . .

And now at last, he’d been united with Jenny. He was no longer on the underside of the tapestry, where all he could see were the snarls and knots and frays. He was now on the top side, where he saw the beautiful work of art woven by the Master Artist.

Dealing with the uniqueness of human beings the angel explains

I am spirit capable of taking on a body. You, however, are spirit and body integrated into one. That which you take for granted—for instance, inhaling with your body the fragrance of a flower and having it move your spirit—is something I have never experienced, and cannot.

And perhaps the section I enjoyed the most comes earlier on in the book (pages 76-79). On the subject that we will not know everything as soon as we get to heaven.

Of continued learning in heaven

The great wise warrior seemed genuinely perplexed. “I do not understand why. And I certainly cannot imagine why anyone would want such a thing. Learning requires curiosity, exploration, evaluation, and dialogue. To be granted the product of knowledge without this process would violate what it means to be a creature. It would circumvent the process of growth in the grace and knowledge of the Lord . . .

Of boredom in heaven

“Boredom? Here? It is unthinkable. Heaven is the very opposite of boredom. It puts one in the presence of the Beloved himself, and of multitudes of beloved ones. Lovers are never bored, for their delight is in each other . . .

I would gladly recommend this book.