11 August 2016. What more does one want for a good start to a day than a good breakfast? That too when its made by a favourite cousin.

After a quick selfie, Premi Akka, Hannah, and I were on our way to meet Leela Periamma. Premi Akka had made some yummy chicken curry that we were taking to her. I had a warm throw for her and some sugar-free confectionery items.

This is what the side streets in Lingarajapuram look like now.

Leela Periamma, who lives in a retirement home, knew that I was due to come one of these days, but did not know the exact date. We thought we’d surprise her. 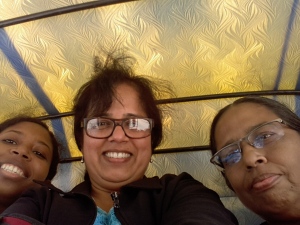 Once we got into the auto, Hannah called her to let her know that they were bringing her some chicken kuzhambu. How come, they were doing this on a working day, she wanted to know, they could not have taken leave just to bring her chicken kuzhambu. Hahahaha, was she smart! Even from a distance, we could see her waiting for us in the balcony. When we reached, the others took the stairs where as I waited downstairs for a bit and took the lift.

She was happy to see me. I remembered her welcoming, “Selvi, vaa vaa vaa” from the past. Of course, she was a lot frailer now. After spending half an hour or so, we said goodbye, but not before taking some more pictures. 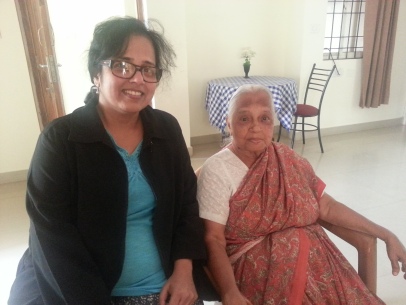