When I was little and being the only child, I did not have real playmates often. But real or make-believe, one of my favourite games was what we called ‘House house.’ Yes it’s the same game that girls everywhere often play—pretending to be a mummy in a home, and cooking was naturally an important component. I did get items from my mum’s kitchen to play with, but I never actually thought of making a really edible dish as part of the play activity.

My mother-in-law, on the other hand, who would be about 95 had she been alive, had had a lot more fun when she was little, doing some semi-real cooking.

One of the items they made in the course of the play activity was a lollipop-like candy that was spicy, sour, and sweet. Apparently, they mixed tamarind, dried red chillies, and sugar. They would then put blobs of this to gooey ‘goodness’ on the ends of little sticks (twigs?), and it was ready for human consumption!

From the ingredients she mentioned, I could imagine the delight of a child in tasting those real and sharp flavours, albeit crude.

Today, years later and miles away in Auckland at work, we had our first team meeting in the new year. Our manager gave us some candy from his visit to his home country Mexico. The candy with alcohol was an instant hit (no pun intended) with the others. 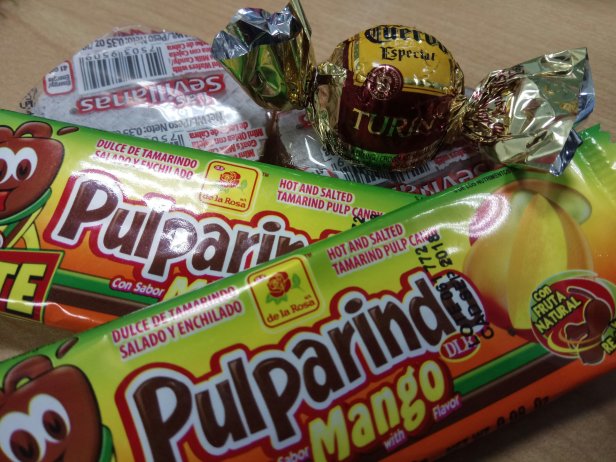 But I found the Pulparindo very interesting. The moment I tasted it, I remembered my mother-in-law’s playtime candy. The Pulparindo is Mexico’s Pulp-and-Indo connection, shall we say?