With a little mixed “flock” of four chickens, it feels like a catastrophe when one falls sick . . . and dies.

This happened to my Barred Rock, Barbara. On Thursday night, she did not climb up to the roost area but stayed near the door of the coop. I thought it was just the heat and let her be. Friday morning, before I left for work, I noticed that her gait had become imbalanced and she was shuffling about.

She seemed to be eating fairly normally and drinking too.

But her tail was down and she was unhappy. I looked up the symptoms on the Internet. Could it be Marecs disease, I wondered.

That evening she was doing poorly. Her bottom feathers were not fluffy and pretty as usual, but were straggly because of diarrhoea. Still she had the strength to go up to roost. I considered quarantining her, but the chooks had already retired for the night.

On Saturday morning Barbara seemed to have rallied and even seems to move better. Being Auckland Anniversary weekend, we were all very busy. That night, again she went up to roost.

Sunday morning, she was not too good, but I saw that she did eat something and drink some water. But she did not come running for grain and treats as usual. That evening, she was definitely withdrawn.

While the other three basked in the evening sun,

Barbara sat hidden in the shade, looking more like a partridge than a hen. But her eye constantly followed me. 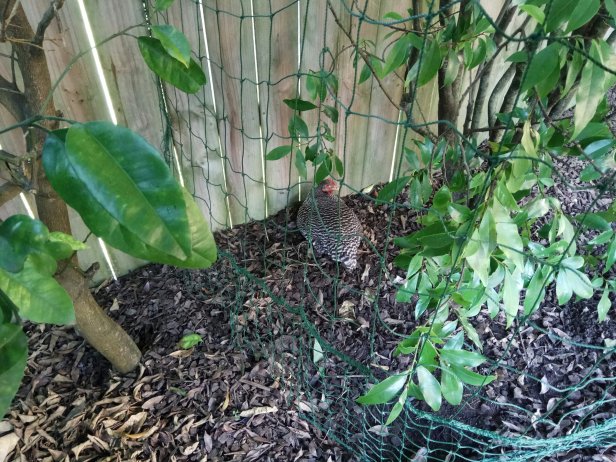 But the brave bird went up to roost yet again.

Monday morning saw no big change. I had to go out of town and returned late in the afternoon.

I settled her in a cardboard box, on a bed of wood shavings, with water to drink and some chicken mesh on top, as a precaution against Mia our cat. Barbara had the partridge posture and did not object.

After some research on YouTube and understanding where the trachea is etc., I lightly wrapped a small towel around her to keep her still, put her on my lap and fed her a little ball of scrambled egg. She seemed to breathe heavily at that point, so I waited for a few minutes. When she relaxed a bit, I opened her beak gently and dropped a few drops of yogurt in the front of her mouth. She seemed to readily take in the yogurt. I then gave her some water in the same way. When I gave her another small bit of scrambled egg, she kept it in her beak without swallowing. As I don’t really have any experience, I am not sure if I was doing this right. But she did not seem to be choking or anything.

I decided to put her back in the box and so got up with her still held gently under my arm. What happened in the next 10 seconds hardly bears describing.

When I stood up, she seemed to flap her wings. But it was more than that. It was a lot more in fact. I think she had a heart attack as I was holding her, because her body arched in a way that made it very hard to hold her. Even before I put her down she was gone.

It is said that if you have livestock, you will also have dead stock. So I suppose, I have to get used to it.

Although not pleasant, it was an important experience. I think I need to find a poultry vet as well; Maybe an antibiotic could have saved her. I will be keeping an eye on the other birds for a few more days, just in case.

Barbara will be remembered for her intelligence and proper ladylike nature. I intend to plant something over the spot where we buried her. 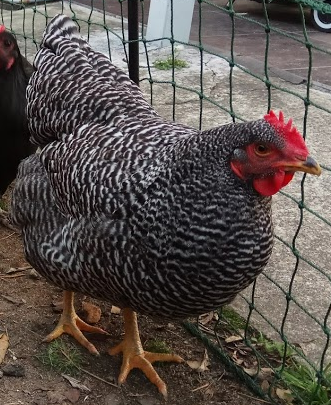