Skip to content
Date: May 1, 2019Author: Courage to Tremble 0 Comments

In the light of Auckland Council’s no-roosters-in-nonrural-areas rule, now that I had one male, I had to think of a way of getting rid of him.

I felt that I ought to start learning to kill and dress chickens for the table myself. But Philip could not bear the thought of it, and I wondered how I would be able to convince him that it was the way to go.

My reasons for this were:

But atleast this time round, I did not have to bother about homekills.

New Zealand does not have predators like foxes, and so my perception was that my birds were safe. I had not locked the coop door in months. Moreover, I assumed, no creature could get past Susie when it came to getting close to her chicks.

But one morning, when I went out to feed the chooks, I was met by a horrible sight. One of my brown-shaver pullets was dead near the entrance of the coop, with grave injury on her throat, but otherwise unharmed, while the young rooster was lying headless at the far end of the run.

It turns out that although we do not have foxes, we still have large rats, stouts, and weasels that can kill chickens. We were told that the tidy way in which the chicks had been attacked ruled Mia out as the perpetrator, thank goodness. I had also not noticed one step in the chicks story, which was that round about the time of the attack, Susie had stopped caring for her chicks, and the chicks had been on their own

So that was why I did not have to deal with my rooster, but sadly, I also lost a healthy pullet.

I have one fine Brown Shaver called Helen. 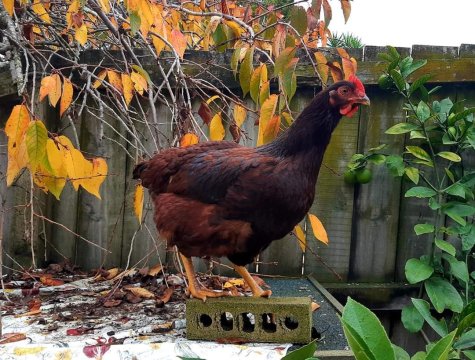