What is the Immigration problem that is making headlines? The Partnership policy (click here to get an idea) expects couples to have lived together under the same roof. When New Zealanders from cultures that practice arranged marriages go back to their countries of origin to marry, their spouses apply for Partnership-based visas. For a number of years now, realising that it is hard for those from such cultures to meet the criterion of living together for any duration of time before the wedding, Immigration has used its discretion and granted these applicants a visit visa that would help such applicants begin their life together and hopefully be able to meet said criterion by the time they apply for Residence based on Partnership, which requires that couples live together for at least 12 months. [Even the idea that the rules were bent is confusing, as the Operational Manual seems to allow for newly wed partners to enter the country and stay for nine months. These manuals, the earliest available version dated 2010, were not meant to replace the laws and policies in place, but we seem to have some layers of ambiguity here that have to be dug into by experts. And meanwhile we will have politicians and experts, and even opinionated strays like yours truly who will justify their positions from one or other of these layers of confusion.]
Last year, Immigration went through a great deal of restructuring, so much so that applications piled up in places like India, resulting in much delay in processing times. Only the powers that be can know the real sequence of events, but at some point, Immigration began to pull back on the discretionary granting of visas for partners; some applications were declined. This was seen as a good thing in some quarters. Deputy PM Winston Peters (whose party New Zealand First forms a coalition government along with PM Jacinda Ardern’s Labour party), claimed credit for the changes in Immigration. This caused many from the Indian community to raise a furore, describing this as racist and discriminatory. Then New Zealand First MP Shane Jones made some unhelpful and incendiary comments. This was followed by MPs of Indian origin and others across party lines clamouring for the PM to say something or do something. Mr Lees-Galloway, Immigration minister, is said to have asked for Immigration to come up with a solution to ensure that Indians are not treated unfairly. 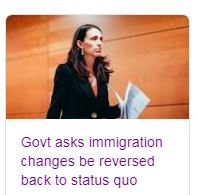 Jacinda Ardern finally backed down and said that Immigration had not made the recent changes “under the authority of Cabinet, my expectation is that we will reverse back to the status quo and the way it was operating before.”

What makes me write this post? I was listening to Heather Du Plessis-Allan on NewsTalk ZB on Wednesday, 7 November 2019. While I felt that she was missing some crucial aspects of the issue, her gripe about Ardern having so easily thrown away what Immigration experts had recommended was an interesting observation. Anyway, before the opinions coming left, right and centre have me completely confused, I felt that I should put my thoughts down, and hence this post. Already, this issue has so many facets.

What are the problems with the Partnership Visa that I see? For nearly a decade I have wondered about the partnership visa policy and felt that it needed improvements. Here are the some things, not in any particular order, that strike me as rather odd.
Firstly, the requirement for a couple to have lived together to prove genuineness of relationship. Cohabitation is brandied about as being the only Kiwi way. It is true that living together before marriage became more and more acceptable after the 1960s, so much so that today, it is the most usual way people do life. But you also have people from conservative backgrounds who do not live together before marriage. In fact, for thousands of New Zealanders, their religious convictions would not allow cohabiting. And even if you had no problem with it per se, why would you want to be bound by a restriction like this? So the criterion of having to cohabit to prove genuineness of a partnership seems unreasonable to me.
Secondly, not being able to bring in a partner from overseas. Again, this is not an issue that troubles only those with arranged marriages. At least those who have arranged marriages can hope to use the provision of the ‘Culturally arranged marriage visa.’ But everyone else who wants to have a partner from overseas is stuck. The plethora of dating sites are mostly useless for Kiwis who want to broaden their online-dating horizons. Why should only Asians have options. Why should other Kiwis be handicapped. I believe this is what Shane Jones was alluding to when he said, “Please talk to garden-variety Pākehās today who I can tell you I have come across in large numbers since 2005 who go through extreme processes in many cases to bring their foreign partners in as wives and husbands. Ask any MP and they will say this is not purely an issue about the immigrants coming from India.”
Thirdly, the ‘Culturally arranged marriage visa’ is quite hard to use. As I said before, Kiwis from cultures like those in India get to use this special visa. It is to us what the horns of the altar in Bible times were to fugitives seeking asylum. New Zealand is now our home, but it has been hard for some of our children to find partners here. Maybe the next generation will find it easier. We used this wonderful provision for two of our children. But this too requires some amount of “extreme planning” to use properly. For instance, if a boy wants to bring a girl over for an arranged marriage, all the best for convincing the girl’s family that they need to send the girl against cultural norms to the boy’s place to be married. As it is in the West, the wedding would normally happen at the girl’s place and not at the boy’s. Moreover, the cost of having the family to make the trip to New Zealand adds to the overheads, not to speak of the uncertainty surrounding the granting of visas for the group to visit New Zealand for the wedding. Also, the application asks for evidence that the marriage is happening in accordance with cultural norms. In providing this evidence, one is never quite sure if we are doing enough. But I suspect that the officials, because of their training and experience, are able to detect what is genuine and what is not. So while it is hard work with the provision of the ‘Culturally arranged marriage visa’, it has been a lifesaver twice for us. So thankful!

Why did the Indian community react the way it did? I do not agree with everything that those from the Indian community have said about this issue. In fact, I feel that many have not grasped what the situation was before Immigration started using their discretion and “bending” the rules a little, albeit with reasonableness. But what I completely agreed with them about was about the plight of couples affected. Sam had come here as a student and completed his course creditably, after which he got a very good IT job. His parents, with his permission, found a bride for him, and he got to know her well by talking to her over Skype for many months. He then found out whatever he could about the process from the Immigration website and also from the call centre. Because of rumours of long delays, he and his bride meticulously planned and collected documents and other evidence, whatever was possible to collect before the wedding. He then went over to India, got married, submitted the application and also spent a few weeks with his new bride before hurrying back to his job here in New Zealand. Sam is just the kind of hardworking and intelligent immigrant we want for New Zealand, and having done nothing illegal, he waited with expectancy. Can you even imagine the fear and distress he and his new bride must have felt when applications were declined?
Just because we come as immigrants does not mean that we put our lives on hold. It does not mean that we do not want to marry or that we can simply ditch our parents (the suffering of some of our parents is beyond the purview of this post, or I’d touch upon it). Surely, we do not require a New Zealand version of the Thirteenth Amendment of 1865. But sometimes, the callousness with which people say things is shocking. Let us not forget that at the real end of the problem are real people.

What do I think needs to be done? Three things come to mind.
One, let us not make any drastic change to any policy or even to an Immigration practice without giving enough notice, so that any policy/practice that is in vogue when an application is submitted holds good for the given application. Otherwise, we would be playing with the precious lives of those in the queue. As of now, it looks like PM Jacinda Ardern has given us a reprieve.
Two, now that our collective focus has been turned to the Partnership visa, let us go through it with a fine comb and make it more sensible. Surely, if intelligent people put their heads together, we can come up with a way to be careful about who we bring into the country without shooting ourselves in the foot and restricting our freedom of choice when seeking our life partners.
Three, we could make the ‘Culturally arranged marriage visa‘ even better. Of course if Point Two above is looked into, we could do away with the ‘Culturally arranged marriage visa‘ altogether. But if we are going to keep it, then perhaps we can allow for the wedding to happen overseas, if required, with the same stringent checks.
Four, and this is very important, we need to continue to be very strict when dealing with applications. We all want the right people to come in, those who will contribute to our society positively.

[Disclaimer: I am just a lay person having had to make sense of the rules. From experience I know that I have probably missed significant points here and there.  Readers are encouraged  to point these out.]

Any other relevant links?
**An article by the editor of Indian Weekender, Sandeep Singh
**Piece from NZ Herald reporting on recent happenings but without adding any clarity to the Immigration policy.