Susie had gone broody, so on 6 Nov 2019, I ordered fertile eggs from TradeMe. But the lady said that they would be dispatched a few days later. Susie could snap out of the broodiness at any moment and so I told the lady to hold the order for me. But the following Monday, Susie was still broody, so I asked for the eggs to be sent.

The eggs arrived on 13 Nov. I had ordered nine eggs, but the kind lady from Old Mountain Fold sent me 10. And they were all blueish Lavender Araucana eggs. Susie was having a sandbath and seemed to have lost her broodiness, so I put the eggs in the sand and she wasn’t interested. Never mind, I thought, you win some and you lose some; it’s all in the game.

That night I went into the hen house and noticed that Helen was on the perch like a dutiful chook, but the other two were snuggled together in the nesting box. I took the eggs and put them under Susie as a last-ditch attempt. The next morning, Susie and Summer were still sitting on the eggs. The shared incubation had started and it was Day 1 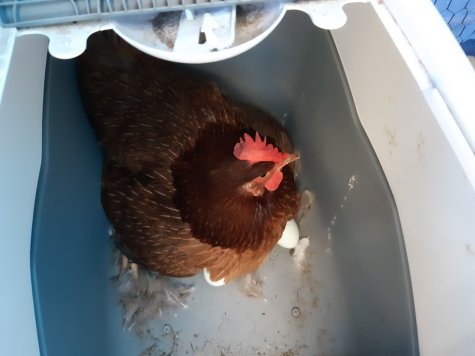 Every couple of days, I would take Helen’s obviously different eggs from the clutch. About a week later, I noticed that we had less eggs. Atleast four eggs had disappeared. If either chook was eating the eggs, she was doing an awfully tidy job of it, for there was no trace of the eggs at all. On Day 11, the egg tally was still at six. I hoped we wouldn’t have any more disappearances. 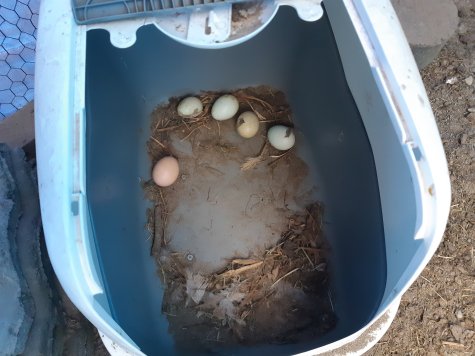 My chicken story took an odd turn on Day 15. The four eggs were still there. All good. But that night, as we gathered for a BBQ with extended family, a huge rat was sighted climbing over our fence, close to the hen house.

Then, later, when looking at the box of Christmas decorations, which we had placed on top of the air conditioner unit in the patio just this evening, we saw that something had bitten into the cardboard box and into the icecream box that had the christmas ornaments. 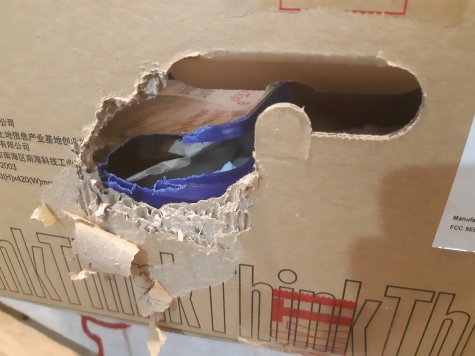 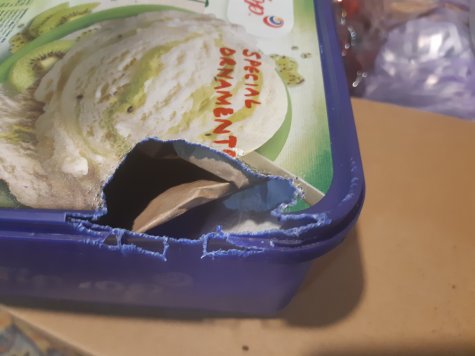 Obviously it was the rat, and it had had the nerve to eat into the box under our very noses! So this must be the egg eater, and if that was the case, the other four eggs were not safe. This was one fierce and hungry rat.

So with the help of Prisy and Tim, after all our guests had gone home, I got the small old coop ready and took the eggs out from under Susie and Summer and placed them on some sawdust in the small coop’s nesting box . We used this opportunity to “candle” the eggs with the help of a phone torch, and they seemed to be developing alright so far.

When I got Susie and Summer into the small coop, they would not sit on the eggs. So we brought their usual cat-litterbox nesting box from the big hen house and into the small coop, and put the sawdust and eggs in it. Susie and Summer still would not sit on the eggs and huddled together in another location in the coop. Over an hour had passed since they last sat on the eggs. The only reason for refusing to sit that I could think of was that perhaps they did not like the texture of the sawdust. So I took the eggs one by one and put them under the chooks where they were, huddled together.

After a minute, Susie arranged the eggs and they were sitting on them again. Would the eggs be OK or had the distress of the night been too much for the developing chicks. We were into Day 16 already.

When I checked on them at 8:50 a.m. the two were wanting to get out of the small coop, and the eggs were cold to the touch. Who knows how long they had been off the eggs, I thought. Sadness. I would rather have the danger of a rat getting an egg or two than lose the project all together. Not wanting to give up yet, I moved the cat-litterbox nesting box, sans the sawdust from last night, back to the hen house where Helen had spent the night alone. I put the now-cold eggs in it and moved Susie and Summer back. [As I was doing all of this single handed, the hens escaped into the garden for a bit and dug up the garden some, and I remembered why I had moved away from the free-range concept to larger-henhouse concept. Susie is easier to catch, but is hard to hold and carry. Summer on the other hand is extremely hard to catch but is light and manageable once caught.] Interestingly, now, Susie shows no interest in the eggs, but Summer has resumed her duty.

I found a motion-triggered dawn video in my Arlo app that shows you that the birds had been sitting on the eggs till 5:28 am that morning, shortly after which the camera was knocked off.

So going over the events of the morning, we do not know what happened from 5:30 am to 8:50 am. I assume the worst that the eggs lay abandoned for about 3.5 hours. Poor developing chicks!

And now Summer sat dutifully on her eggs till 4:15 pm. I know because I was out of the house and checked via the camera in my phone.

I then drove home and when I checked the hen house half an hour later, I saw an egg missing and the other eggs on the ground.

So I placed the eggs in the nesting box of the little old coop once more and this time put only Summer on them. She would not sit; even a couple of hours later, she wasn’t going anywhere near the eggs.

I buried the eggs in various flower pots. End of story. But it was exciting while it lasted.

Moral of the story: Keeping chickens is for the strong minded.

A few days later, I called the fantastic husband-wife team of exterminators at Quality Carpet Care, who installed the perfect bait for the rats in tamper-proof bait boxes designed only for rats. Hopefully, next time round, I will fare better.